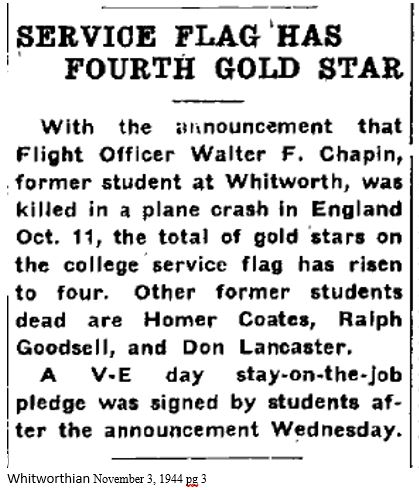 Walter F. Chapin Jr. grew up in Post Falls, ID the son of Walter Chapin Sr. a successful shop and property owner in the Post Falls area. He took piano lessons as a child and was a member of the Boy Scouts. In 1938 Chapin graduated from Post Falls High School. He attended Whitworth College for two years before transferring to Washington State College where he studied music. While at Whitworth Chapin served as the campus bugler and trumpeter in residence. He assisted the Christian Endeavors club by accompanying their Christmas Caroling efforts with trumpet, and he played for the ceremony held in celebration of Whitworth College’s new 65 ft. flag pole. Chapin also played trumpet during the annual open house on campus performing with the “Whitmaniacs” as part of the event’s entertainment and in the Whitworth band. Walter was a Senior at Washington State College when he was called into service in 1943. Chapin received his pilot’s wings and commission at Luke Field, AZ and the he married Lois Margaret Chisholm of Pullman in January of 1944. After their honeymoon Chapin was sent to Tallahassee, FL to complete his training as a fighter pilot in the Army Air Force. By the July of 1944 the 22-year-old was piloting a P-51 Mustang based in England. He participated in strafing, dive-bombing, and bomber escort missions in the European arena. Chapin died Oct. 11, 1944 in a plane crash in England and is buried in Cambridge.