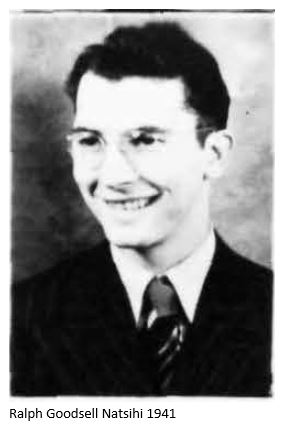 Ralph N. Goodsell was born in South Dakota December of 1919. His family moved to Colbert, Washington and he attended Eastern Washington College for the fall of 1939. During this time he participated in the production of Eastern’s yearbook, the a cappella choir, and the college’s production of the play “First Lady.” In the spring of 1940 Goodsell transferred to Whitworth College where his older brother James was a student. He participated in Whitworth’s yearbook, the Whitworthian newspaper, French club, student government, and at least three dramatic productions. In 1941, he was working as a civilian employee at Midway but it was not until February of 1943, at the age of 21, Goodsell enlisted in the army. He was sent to a training school in the eastern United States. He was traveling back to Colbert to visit his family when the plane he was in failed, crashing just outside of Reno, Nevada in May of 1943. The official army record lists the death caused by crushing and the causative agent being an "Aircraft, heavier than air".