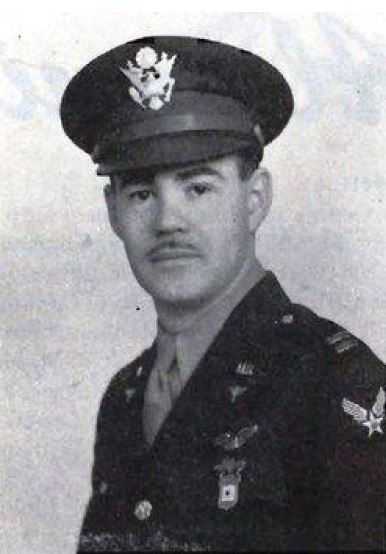 John E. Gay, the son of Dr. and Mrs. John O. Gay, grew up in the Spokane area and attended Lewis and Clark High School. After graduation from high school he attended Whitworth College for two and a half years. While at Whitworth Gay participated in football and baseball. In the mid-1930s Gay transferred to Washington State College. Here he became rigorously involved in the National Guard and set himself apart as a skilled marksman. After attaining a degree in accounting in 1939, Gay continued his life in the service. In 1940 Gay completed Officers’ Candidate School in Spokane and in 1941 the twenty-five year-old married Jeane Paine of Cashmere. He was honored as a distinguished marksman. The Gay’s had two daughters Marijean Louise and Jonny Joyce before Major Gay died in the Pacific theater, a casualty of WWII. The B-29 Superfortress which Gay piloted ran out of fuel on its return from a mission over the Tokyo-Yokohama region. Half of the twelve man crew survived the crash. Gay was given artificial respiration for four hours before being pronounced dead March 8, 1945.