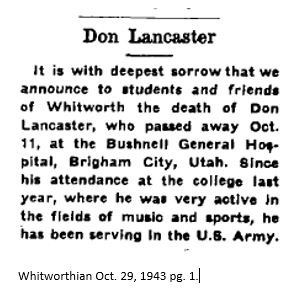 Don Lancaster was born in 1925 and grew up in Spokane. He attended Rogers High School where he began developing his talent as a tennis player and trumpeter. In fall of 1942 Lancaster enrolled at Whitworth College. He was known around the college campus for his musical skills, tennis achievements, and bright eyes. Lancaster continued to play the trumpet for the institution by participating in the college pep band. Lancaster played the supporting role of the Usher in the Whitworth production of Gilbert and Sullivan’s operetta “Trial by Jury.” Lancaster was an active freshman both in student life and Whitworth athletics. His hard work on the tennis court earned him the President’s Tennis Cup for being the top male tennis player. He enlisted in March of 1943 and after the completion of his freshman year he was sent to Brigham, Utah for basic flight training. The young man was stricken with acute leukemia and was taken to Bushnell General Hospital where he died. While Lancaster was unable to complete his Whitworth education beyond his freshman year, his sister, Mae, followed in his footsteps and successfully graduated with the Whitworth class of 1946.